Summer time is rapidly approaching and I couldn’t be more excited. True, I’ve admitted to fall and winter being my favorite seasons. And they still are. But there are some things about summer that I just love.

Yes, it is acceptable to eat ice cream any time of year. But really, it’s the best in the summer time. Slap a few scoops on a cone and I’m set to go. Even better if it drips and runs down your hand.

Last week, I was absolutely dying for some homemade ice cream. That’s always been B’s department so I asked him nicely to make some (and by nicely, I might mean nagged to death). And he made the best ice cream EVER! Root Beer Float ice cream. No lie! It’s got all the taste and flavor of a float but it’s actually ice cream. It was creamy and delicious and satisfying. If you are a fan of root beer, this is not to be missed! 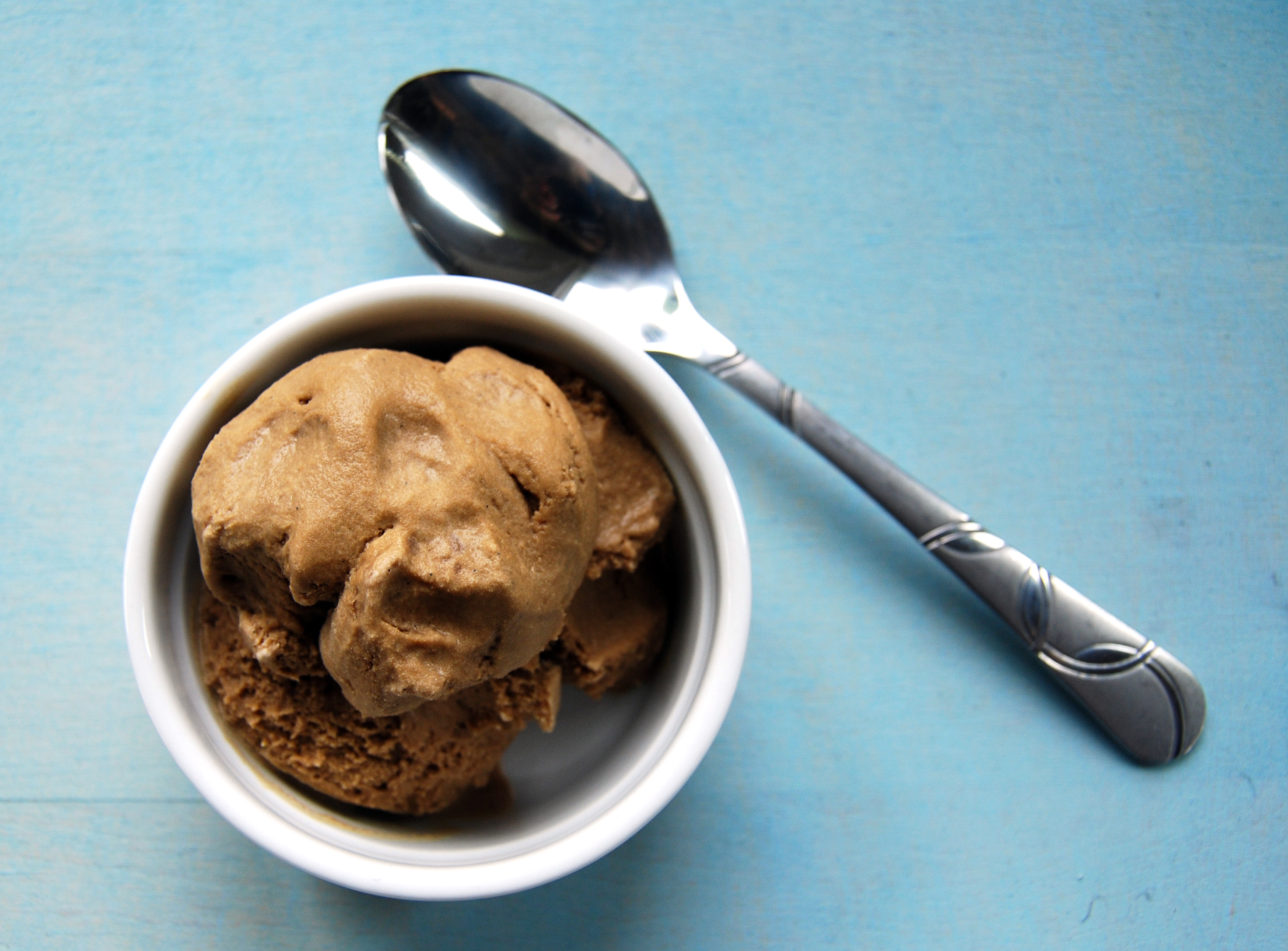 Combine all the above ingredients in a large bowl. Mix thoroughly to combine. Pour into ice cream machine and mix according to manufacturer’s instructions.

Did you know that you are supposed to eat really hot, spicy things when the weather warms up? Weird, right? But I swear it’s true. On those day when the temperatures has climbed into “surface of the sun” range and you feel as though your body has melted into the leather seats of your car, a spicy meal will do you well.  I promise. See, spicy foods make you sweat. And sweat is the body’s air conditioning system. You sweat to keep from overheating. Basically, you are cooling yourself off. So the more spicy foods, the more sweat. The more sweat, the cooler you’ll stay.

I know. I just spent five minutes talking about sweat… But really, spicy foods are apropos for summer time. The spicier the better. Spicy, Spicier, Spiciest! This recipe will definitely add some heat to your menu. Bare in mind, a little bit of red pepper flakes go along way. So if you’re more of a mild fan, adjust the amount of flakes accordingly (1 tablespoon of red pepper flakes = spicier). If you really like to crank up the heat, go ahead and give 2 tablespoons of flakes a whirl. Keep a gallon of milk handy to cool your mouth after!

People, this is my gift to you during those summer months. 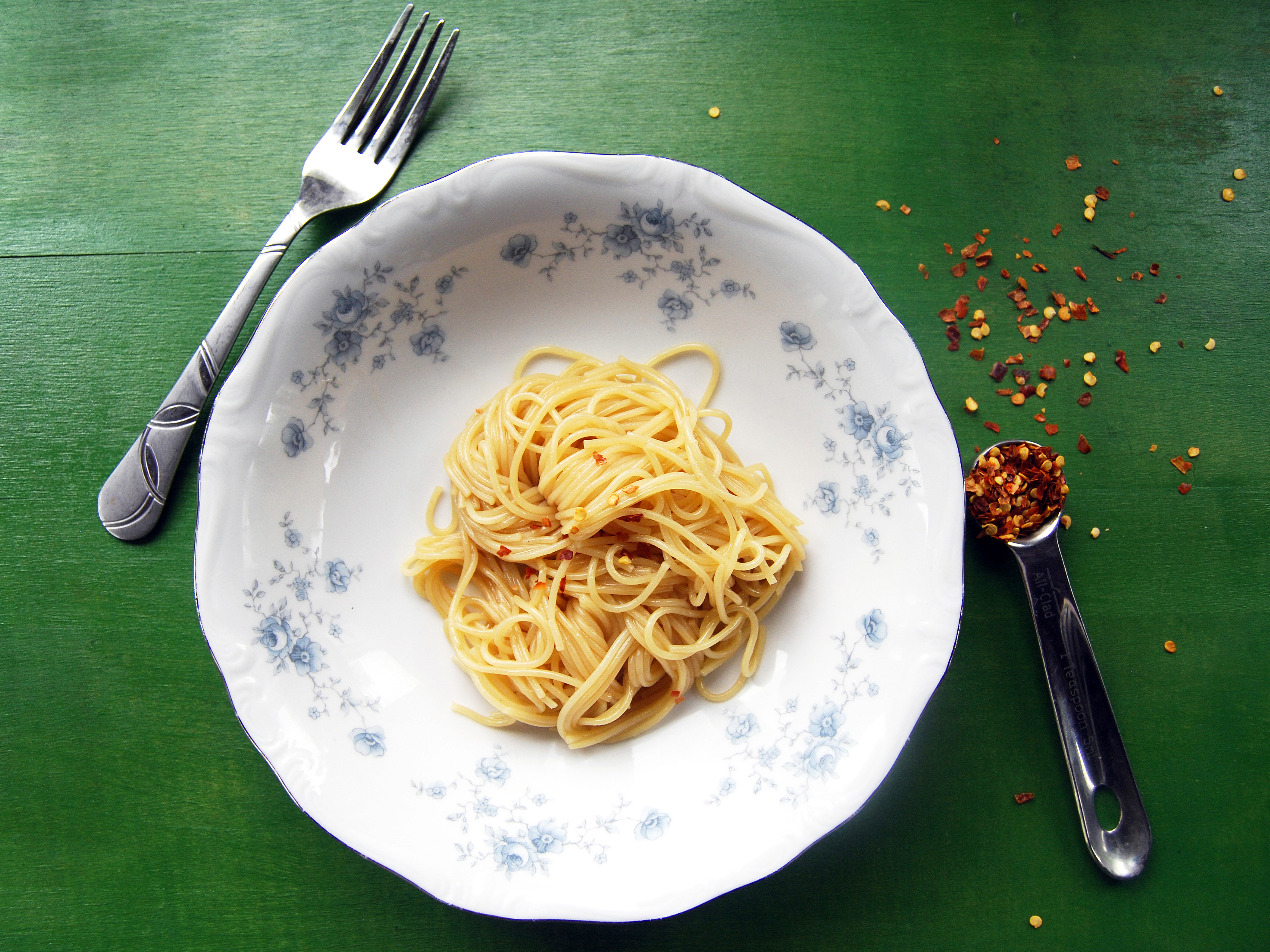 Boil water and cook your pasta according to package directions.

Put your oil in a small saucepan over medium heat. Add the red pepper flakes and let cook for about 2 minutes. After 2 minutes, strain the pepper flakes out of the oil.

Whisk the honey and soy sauce into the oil.

Once you have drained your cooked pasta, pour oil mixture on top and mix well, coating all of the pasta.

For the longest time, I couldn’t get Abby to try any breakfast foods that weren’t Poptarts. We would have Poptart parties and try tons of different flavors. S’more (the best, by far), Grape (a universally disliked flavor), Sugar Cookie, Classic Strawberry. You name it, we’ve tried it. I cannot believe that she doesn’t HATE Poptarts at this point in life. “Don’t you get sick of having the same thing every morning?” says the gal who’s been eating red velvet cake flavored yogurt every day for the past three weeks…

Anyway. She’s moved on since the Poptart phase. Now, we’re into pancakes, cereal, sunny side up eggs, bacon, french toast. The breakfast standards. And she sort of forgot about poptarts for a while. Until she browsed around on my Pinterest (help… even an almost 9 year old can’t stop looking at pins).  I’ve got a board named “For Abby” that is filled with recipes I think she’ll like, crafts I want to do together, bedroom ideas. Hopefully, she never sees the “What to tell your kids when they find out Santa isn’t real” pin…

Moving on. She saw the pin for homemade poptarts and went bananas. Begged and pleaded and twisted my arm into making them (and by twisted, I mean she asked and I instantly bounced up and down from excitement to make them). I knew right away that I wanted to incorporate Nutella, the chocolate hazelnut spread from the gods. And you’ll never believe how easy these poptarts are to make. Really. I think you might have to make them yourself, just to be sure.

I used Nutella as my filling. Feel free to slap anything inside the poptart. Next time, I’m planning on putting some marshmallow fluff inside with the Nutella. Then blackberry champagne jam. The options are endless, delicious and fun. And let’s not forget how amazingly portable poptarts are. Toss that baby in a sandwich bag and you are ready to go! 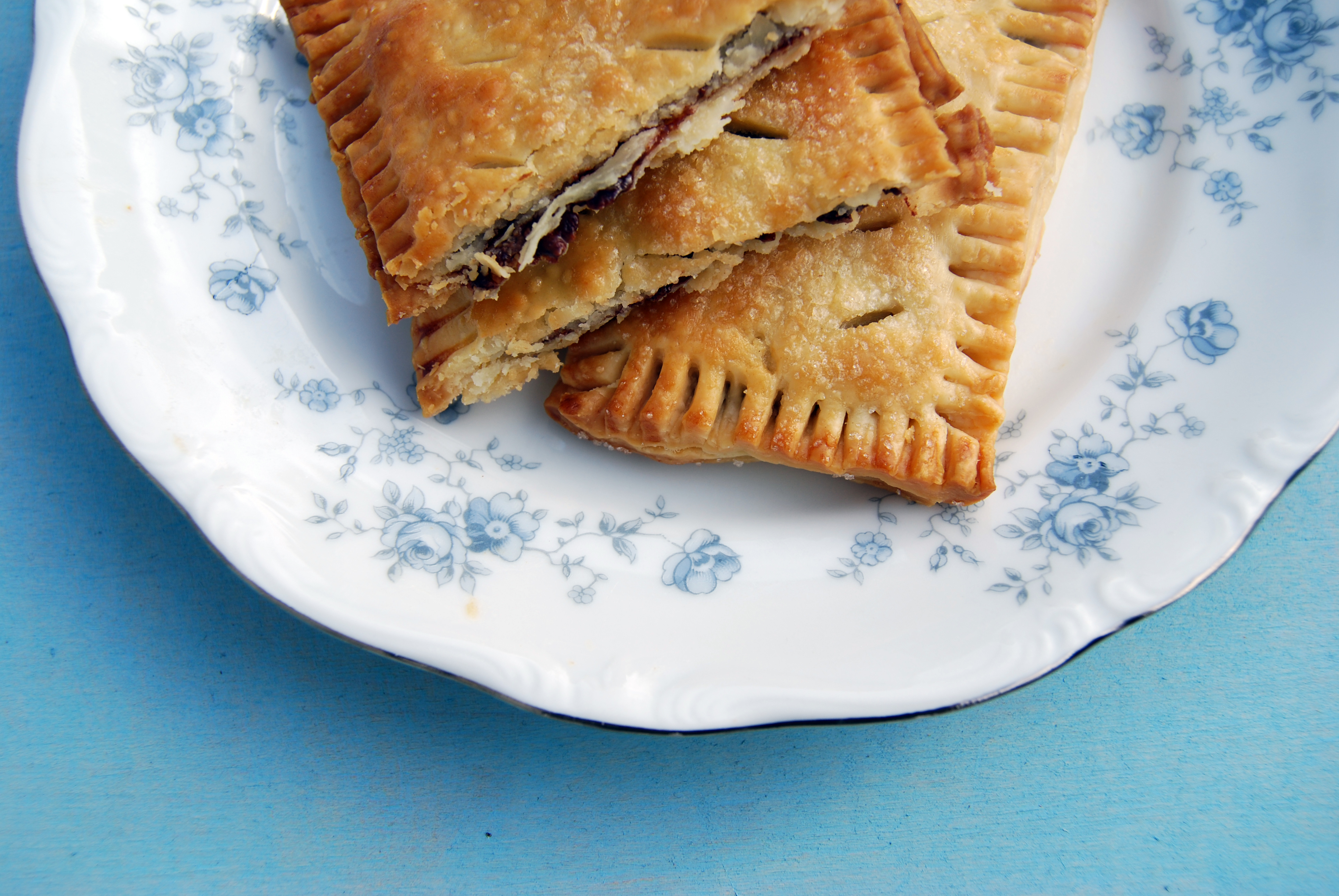 1 pie dough (you can use homemade or store bought)

Preheat the oven to 350 degrees. Lay a piece of parchment on top of a baking sheet and set aside.

Roll out your pie dough into a square. Slice it into even pieces. You’re going to fold one on top of the other, so make sure you cut out an even number. Slather a piece of the pie dough with Nutella, leaving about a quarter inch around the edges. You can use as much or as little Nutella as you’d like. Carefully place a slice of pie dough directly on top of the Nutella filled pie dough. Using a fork, press into the edges of the dough to seal. Repeat until you are out of dough.

Brush each pop tart with egg wash. Sprinkle some sugar on top. Lay your pop tarts on top of the baking sheet. Bake for 15 minutes until golden brown.

This weekend was so absolutely fabulous, I’m not sure I can express it in words. Abby made her first Holy Communion. It was filled with friends and family and good food. We parties, played softball, ate great food, watched a little horse racing and just generally had a great time.

And now, it’s Monday. And we’re all forced to go back to the daily grind. Let’s be completely honest, I am absolutely not liking it. I just want the weekend to go on forever. Doesn’t everyone?

Either way, the world continues to turn. And in order to get through Monday, I need serious sustenance. In the form of creamy, delicious pasta. My take on pasta primavera. It’s just the right thing to eat on a Monday night. What’s your best way to get through a boring Monday? 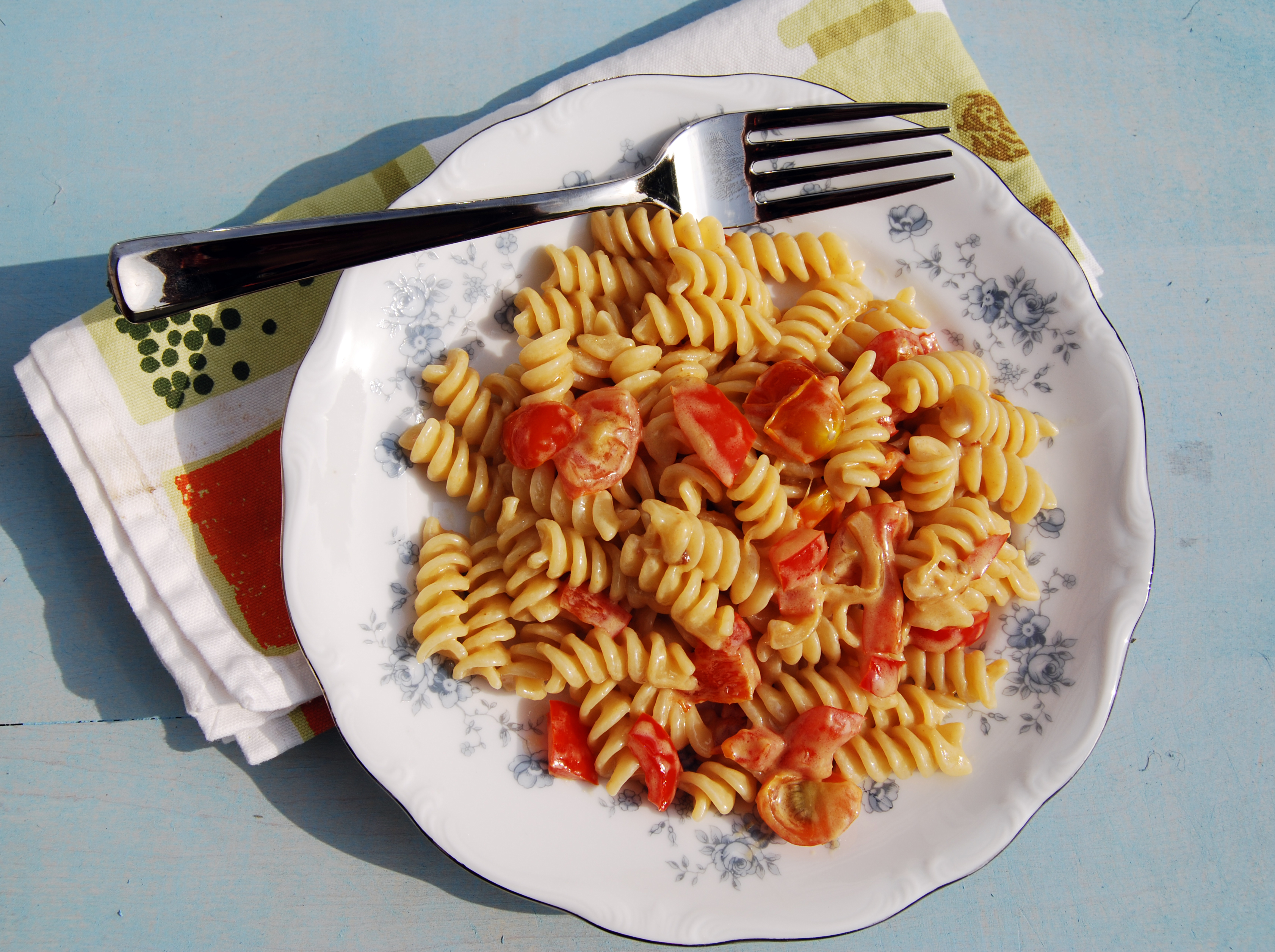 8 ounces pasta of your choice

Cook your pasta in a large pot of salted water. While it simmers away, melt 1 Tbsp. of butter in a sauce pan. Add the onion, pepper and tomatoes. Cook for about 5 minutes until onion and pepper are soft and tomatoes have started to break down a bit. Transfer them to another dish.

Melt the other 2 Tbsp. of butter in the same sauce pan. Add in the clove of garlic. Cook for about 2 minutes until fragrant. Add in the cream cheese and stir. Once it is a bit melty, add in the heavy cream. Stir it well, incorporating the melted cream cheese. Once the mixture has melted and combined, add in the veggies. Stir well to combine.

Drain your cooked pasta and add it to the sauce. Stir well, covering all the pasta with sauce. 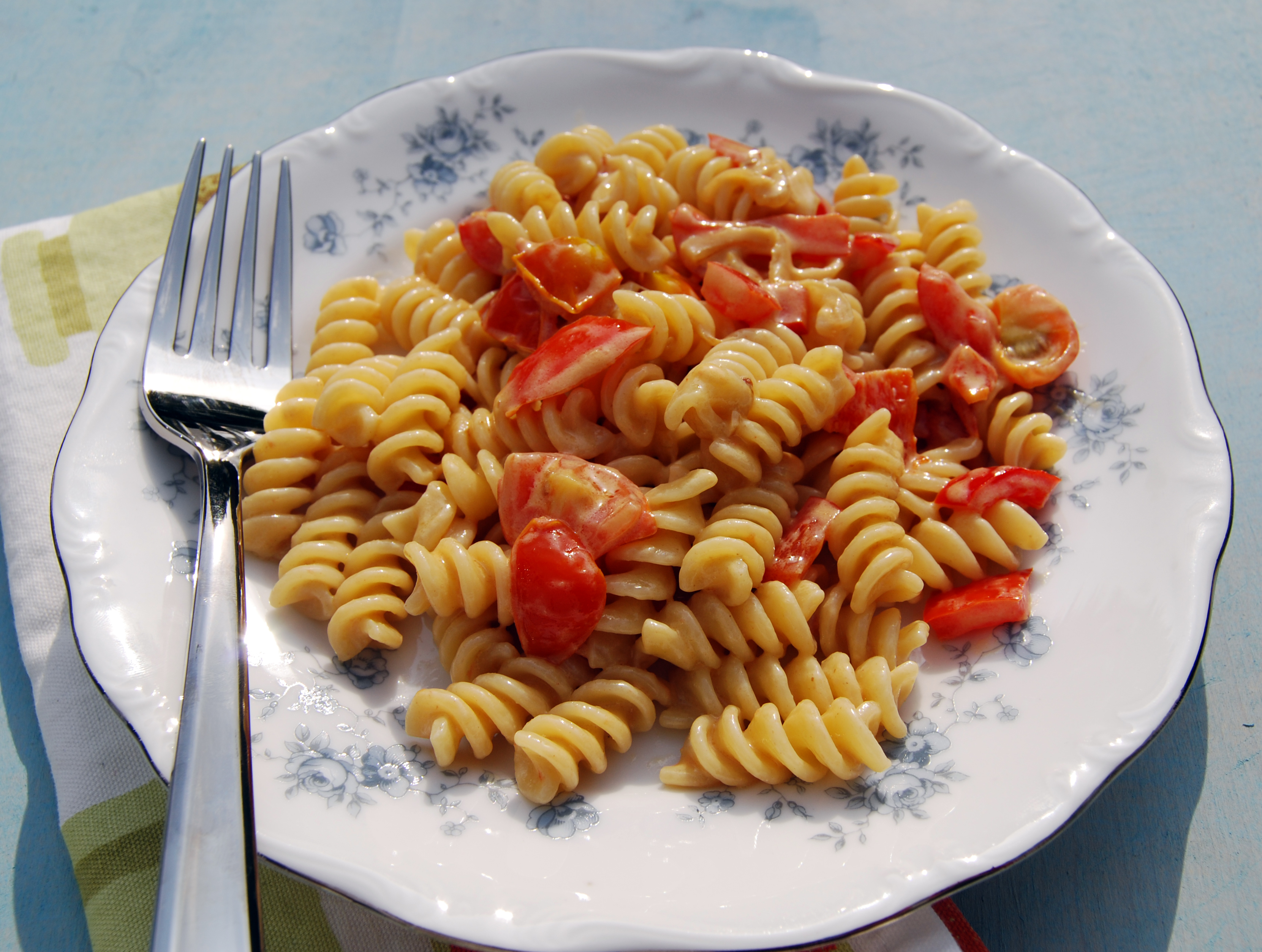 Quinoa is NOT pronounced Ke-Noah. And if you go to the grocery store and ask for Ke-Noah, people may look at you as if you have three heads. They’ll point and laugh and no one will tell you how to actually pronounce it. Please, for your sake, do NOT say Ke-Noah.
It’s actually pronounced Ken-Wah (that’s the best I’ll get at phoenetics). It’s in the grain family. It’s cute and tiny, is perfect when substituted for rice and has TONS of health benefits. It’s not the most flavorful food in the world so it does require a little dressing up. But the options are absolutely endless. If you are in a southwestern mood, you can throw in some black beans, a little salsa and some queso fresco. And if you want something Mediterranean, crumble up feta, chop a few tomatoes and cucumbers and Voila! Really, there are no limits to what you can do with Ken-Wah (once more, for emphasis).
When I was assigned Jenna’s blog (Jenna’s Cooking Journey) for the Blogger’s Choice swap this month, I was at a loss. There were too many savory options to choose from. Desserts, I can always pinpoint exactly what I want to make within seconds. Chocolate or lemon always stand out. But this was no easy task. The options on Jenna’s blog are limitless and ALL super tasty. I went with the parmesan quinoa because 1. I had all the ingredients on hand. 2. I really like quinoa. 3. It was simple to make on a lazy day. 4. The ingredients and name promised simple yet delicious flavor.
It’s definitely a winner. And please, stop by Jenna’s Cooking Journey and check out the rest of her repertoire. You won’t regret it. Just be sure to give yourself a good hour to peruse!
Parmesan Quinoa