Apple pie wheat berry salad is one breakfast dish that will keep you feeling full and satisfied well into the day. 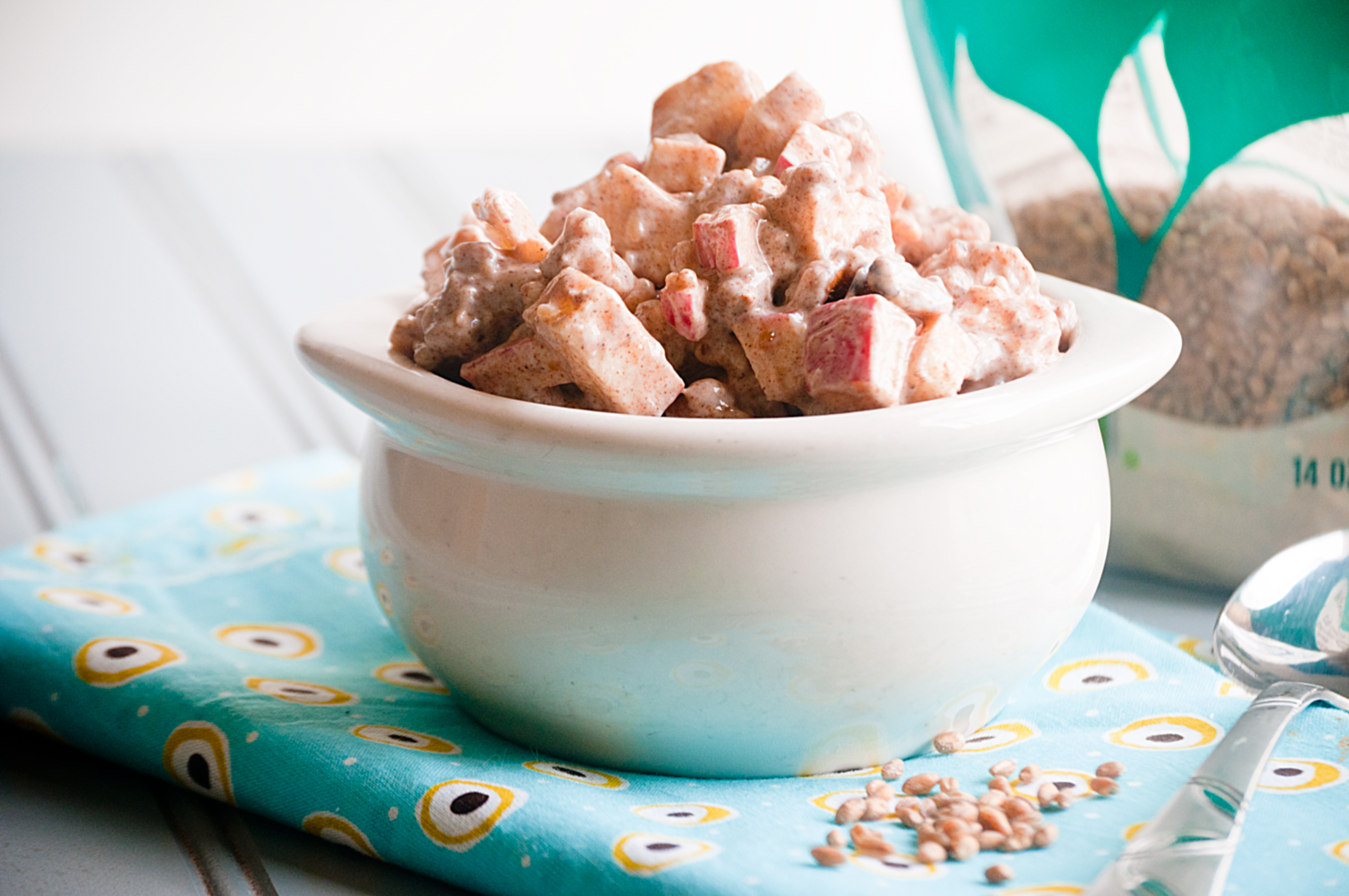 Raise your hand if you’ve ever bought something, shoved it in the pantry, bought more stuff that you’ve shoved in front of it and then forgot all about that one ingredient. My pantry is small and disorganized – so telling – and there are things in there I probably haven’t seen in years. I forget, buy more enchilada sauce and then when I finally get on that weird spirt where I want to clean, I find six or seven cans that I’ll never use. It’s a vicious cycle.

So I’m really excited by this month’s Recipe Redux theme. I just recently started participating in Recipe Redux. Essentially, it’s a group that focuses on taking amazing and delicious recipes and keeping them amazing and delicious while lightening them up. And let’s be real, we probably all search for lighter versions of our favorite dishes, right? Each month, there is a theme and this month, the focus is on those lost pantry jewels. We’ve all done it, but now it’s time to shed some light on those forgotten ingredients! 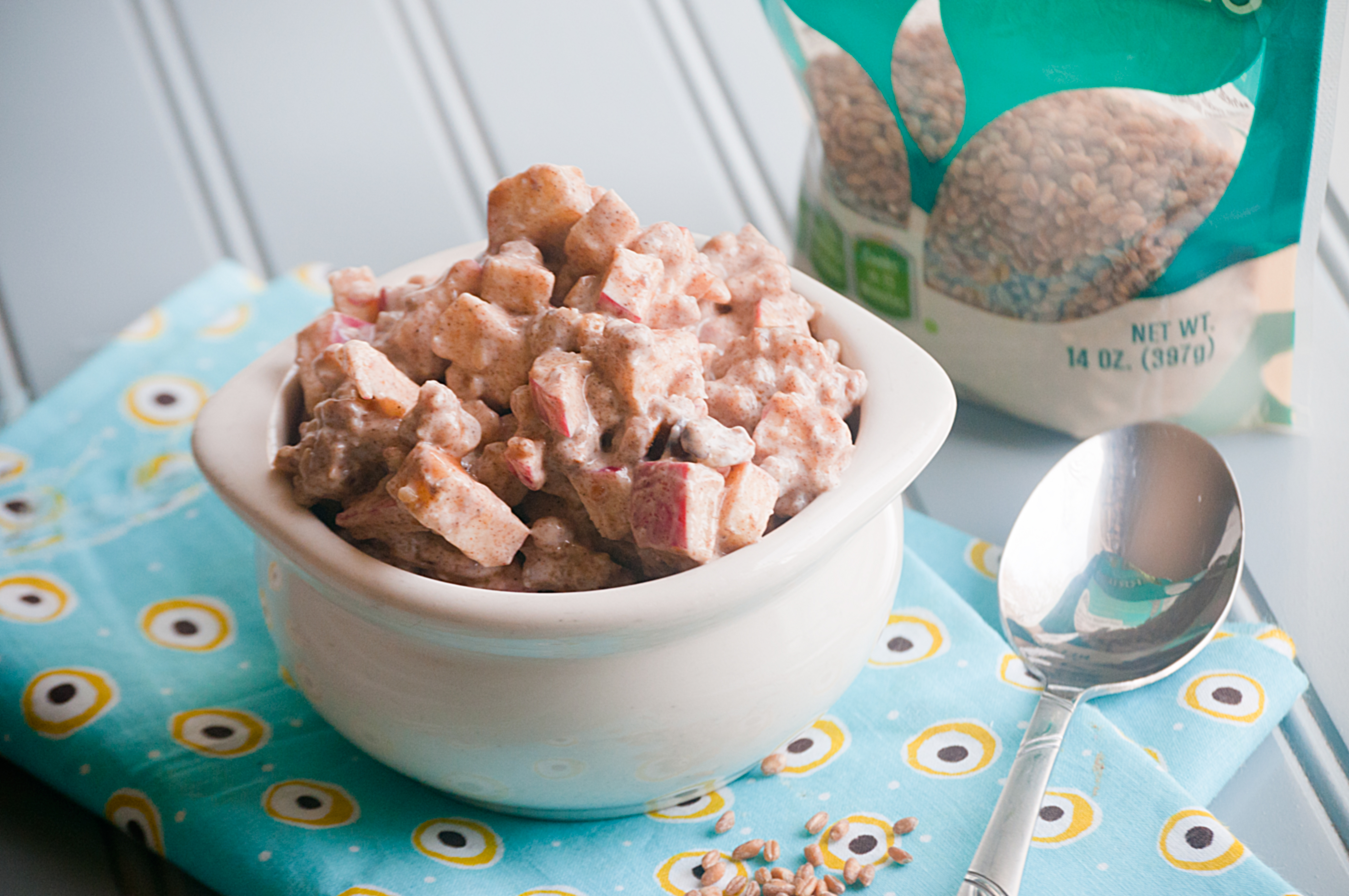 Mine? Wheat berries. The annoying thing is that I very vividly remember making a special trip to Wegman’s to buy wheat berries. They were hidden on a small shelf in the back of the whole foods section, buried behind barley and steel cut oats. It took me 25 minutes to find them on the dang shelf. And then I put them in the pantry, dreaming of all the uses I’d find for them. And then I put some enchilada sauce in front of them. Once again, these little berries were pushed to the back, long lost and forgotten.

Until the theme was announced. They immediately came to the forefront of my mind. I had to dig them out but I’m so glad I did. I threw them together in this breakfast-style apple pie salad. Sure, you could eat it at lunch but it’s a little bit sweet and has a great heft to it, so it makes it ideal for keeping you full long after breakfast.

Slightly adapted from Pinch of Yum.

When it comes to muffins, a fluffy and moist texture is key. But flavor should never take second stage. These carrot cake muffins with ginger cream cheese filing fit the bill in more ways than one.

Remember Full House, when Jesse and Rebecca were planning their romantic Valentine’s Day wedding? They went through a ton of planning and lots of hijinks ensued, as per usual. When they taste-tested wedding cakes, they had every chocolate cake under the sun, plus one square of carrot cake. Jesse felt bad for it, no one ever chooses carrot cake.

I like to think carrot cake is coming into its own these days, with people choosing it more frequently. People are finally starting to realize that carrot cake is awesome. Moist, fluffy, earthy and almost always topped with a really delicious cream cheese frosting. 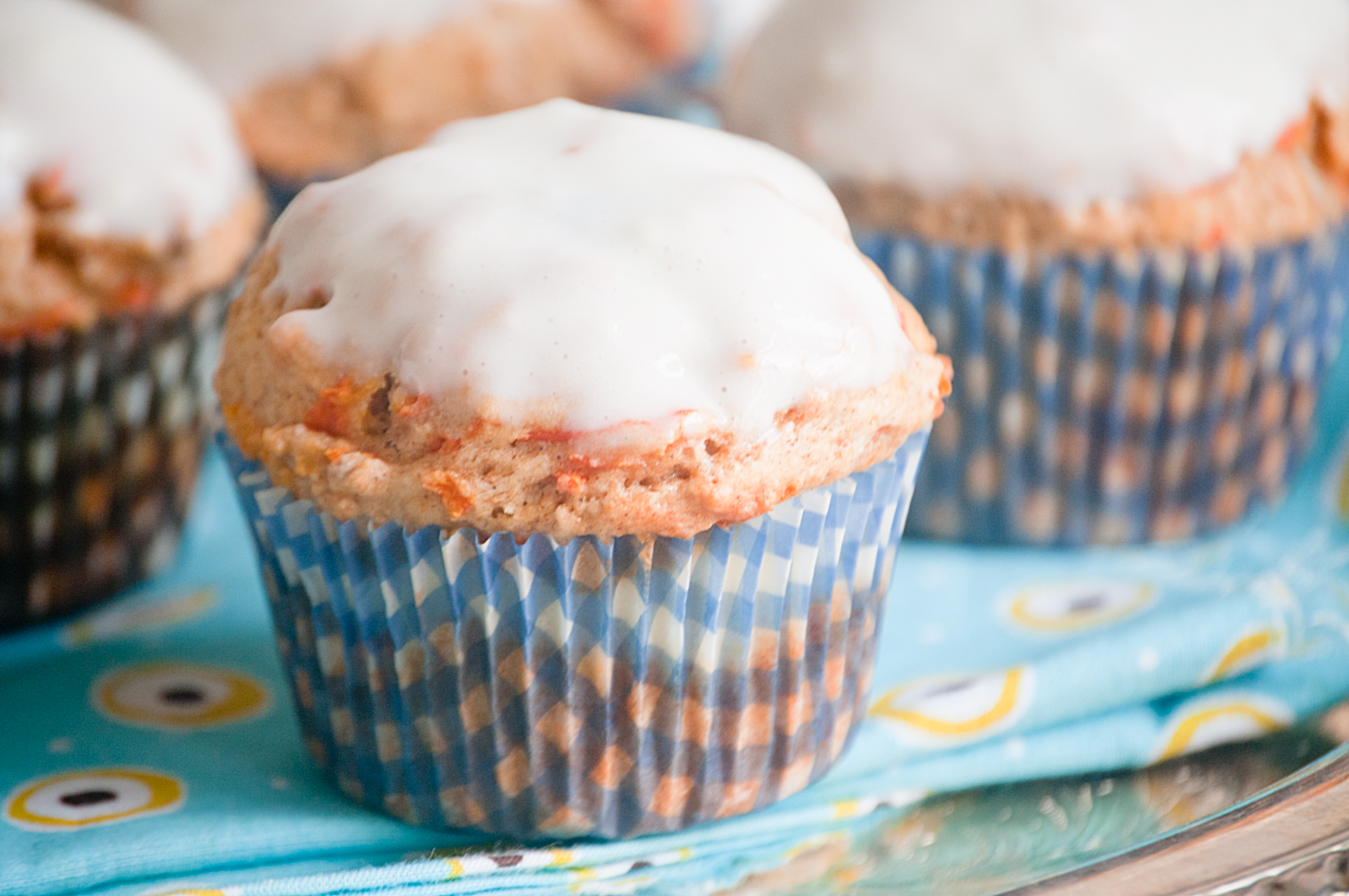 I wanted to make carrot cake muffins so I could enjoy the deliciousness at breakfast time without getting a side eye from co-workers. But that one element, the amazing cream cheese frosting, had to still be exist. What’s the point of carrot cake without cream cheese? I stuffed these babies with a sweet and spicy ginger cream cheese filling. You cut into one and the filling oozes out, it’s fan-freaking-tastic. 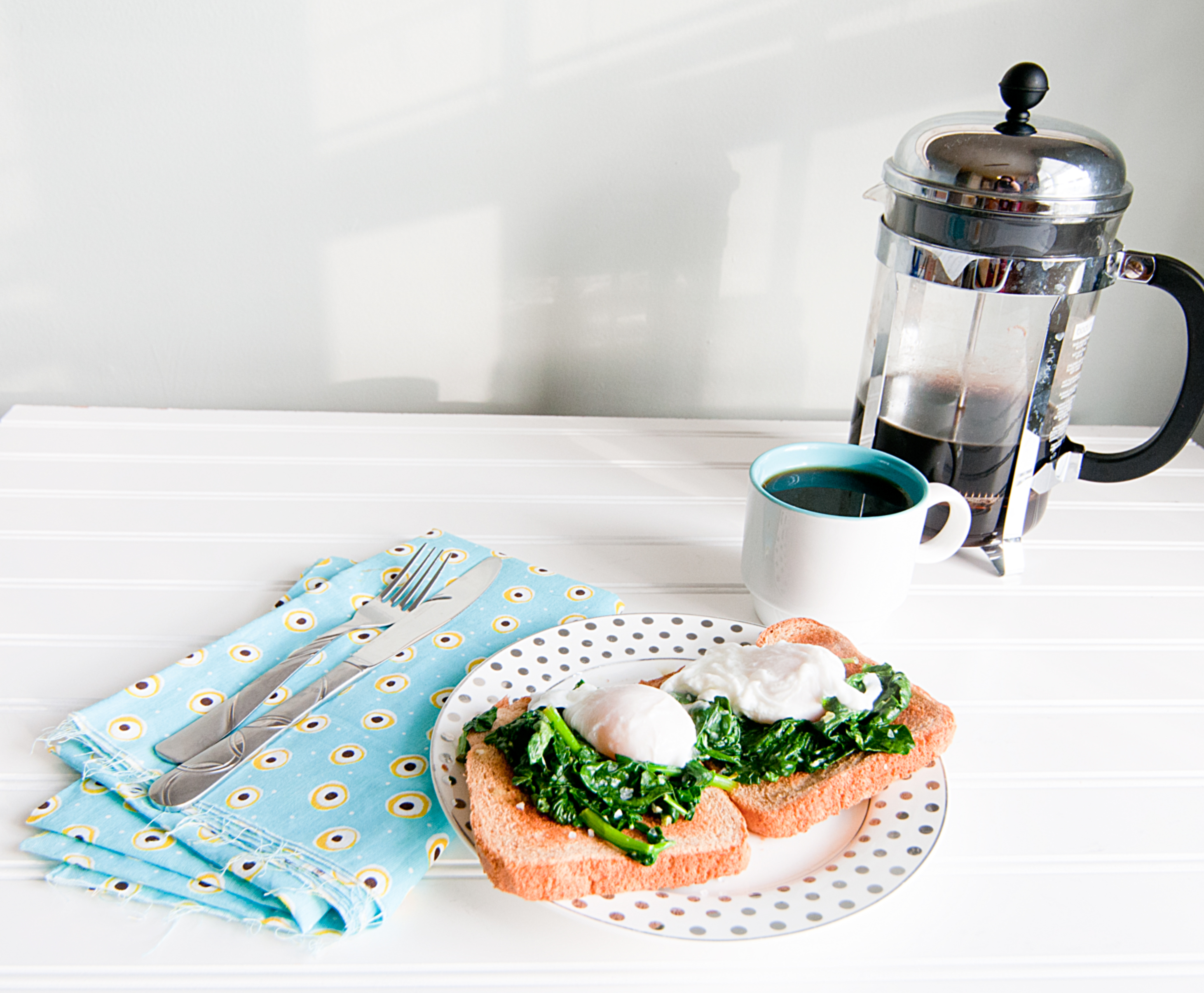 I realize this is the second time in a short period that I’ve shared some type of breakfast toast recipe. I’m not apologizing for it, however. Because hearty breakfast toast recipes with drippy, runny eggs are essentially the best breakfast around. And this creamy spinach and poached eggs is one of my favorites. You get your grains from the bread, your vegetables with the spinach and then a hefty amount of protein from the eggs. Plus, drippy runny eggs. Really, need I say more?

If that doesn’t convince you, let me go on. This breakfast is so super filling. I made it on Saturday before heading out for a long, long day at the National Zoo. I felt full but not heavy. We walked around for hours and saw so many amazing things (orangutans swinging from ropes, gorillas pressing their faces against the glass, the baby panda that has stolen the nation’s heart). If I’d eaten something like a bagel slathered in cream cheese, I’d have felt heavy and overfull. A donut and my energy level would have dropped rapidly. This breakfast was perfect for a busy day when I needed to stay energized and alert. Blink and you’ll miss the baby panda. 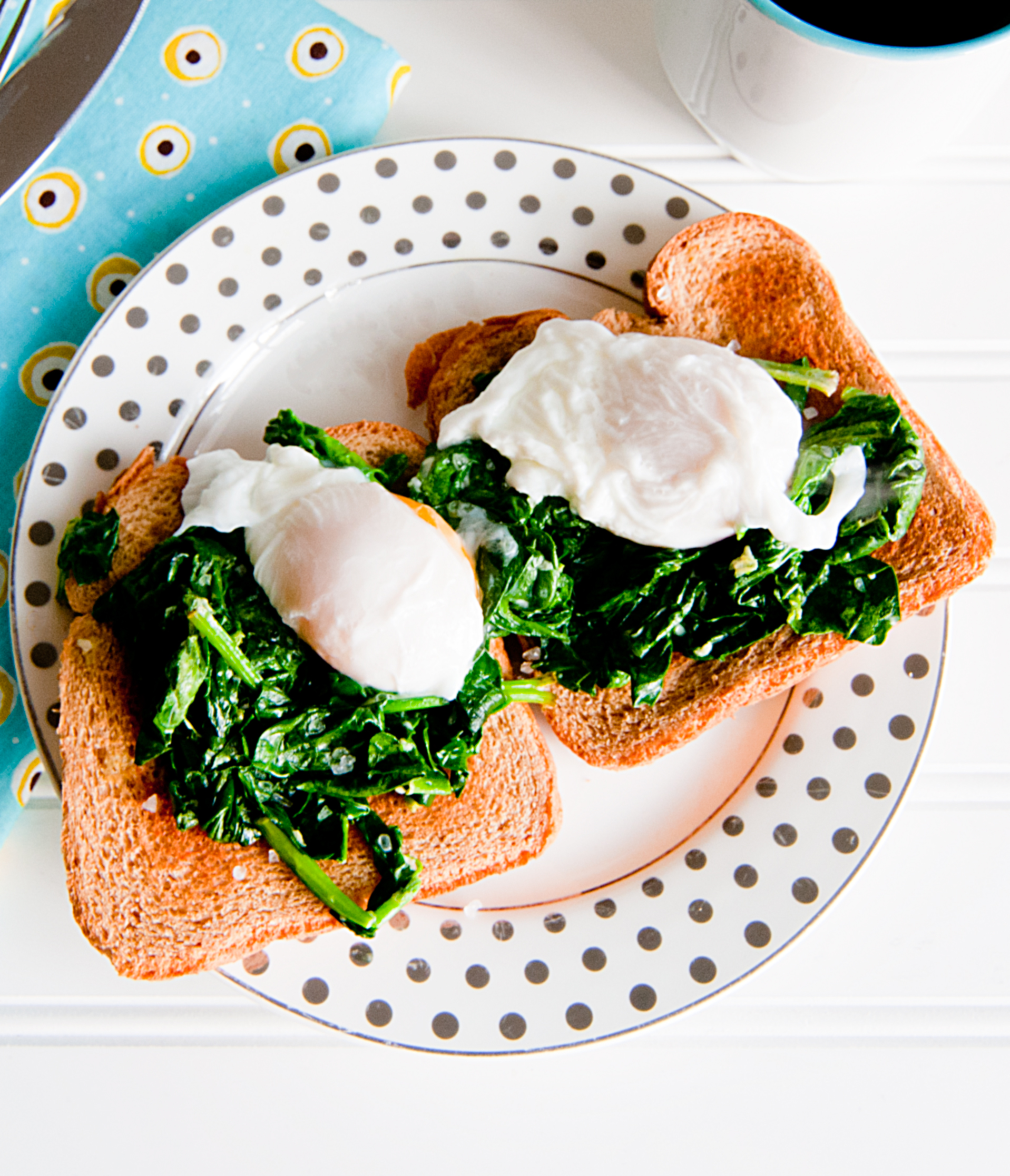 I wish I could say I was responsible for this breakfast. It’s brilliant in its simplify. But alas, I grabbed this one from A Calculated Whisk, my swapping partner for this month’s Secret Recipe Swap. I was really excited to be paired up with Becky this month, she has so many healthy yet delicious recipes to share. I’ve been working pretty diligently the past few weeks to avoid too many ridiculous sweets and bad-for-you foods. So poking through her blog really inspired me. This recipe is almost an exact replica. I simply added some toast underneath. I absolutely must have toast but if you are paleo, skip out on the toast and change the cream to coconut milk.

Breakfast is super important when it comes to fueling your body. This super greens breakfast toast is healthy, hearty and filling. 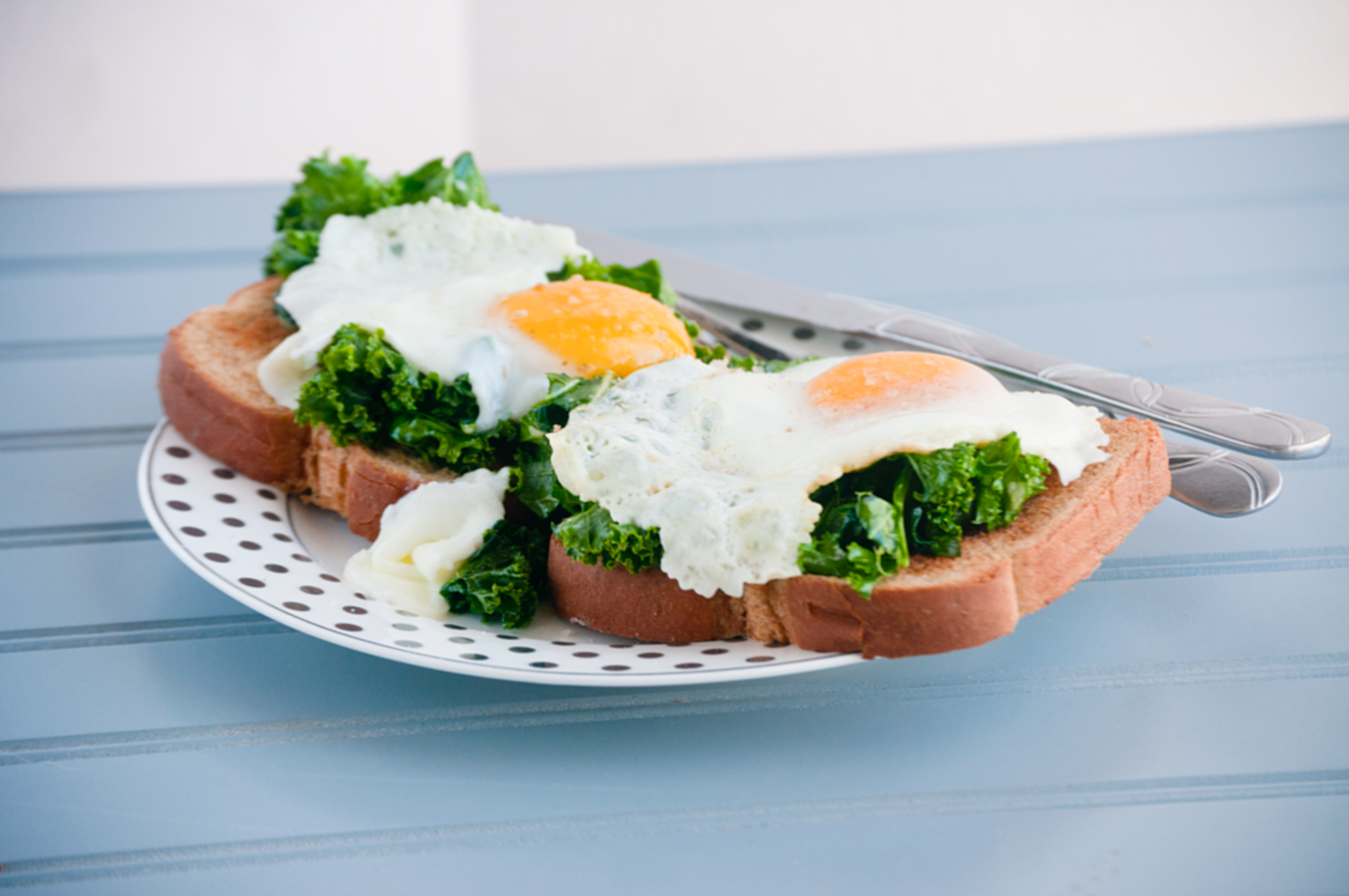 The old saying “breakfast is the most important meal of the day” is a little cliche. And for years, I didn’t believe it. I’d skip it or just grab a quick yogurt on my way out the door in the morning. Honestly, a hearty breakfast is something you come to appreciate as you get older. In my younger years, I’d skip breakfast and, more often than not, lunch. A couple of gooey Laffy Taffys from the school store would do the trick and I’d be good until dinner. Now, I gag at the thought of it. If I don’t have breakfast, I want to eat my own arm off by 9:30. A yogurt won’t cut it anymore.

This super greens breakfast toast is one of my favorite breakfasts these days. It comes together really quickly, which is always an added bonus in the morning. But the real reason I love it is the fact that it is so hearty while also healthy. Crisp, colorful, fresh. The kale and spinach are loaded with vitamins. I usually go with the idea that the greener it is, the better for you to eat. And this breakfast toast is overflowing with delicious greens. Toss in, obviously, some eggs for protein. There is no way to eat this and not feel full. 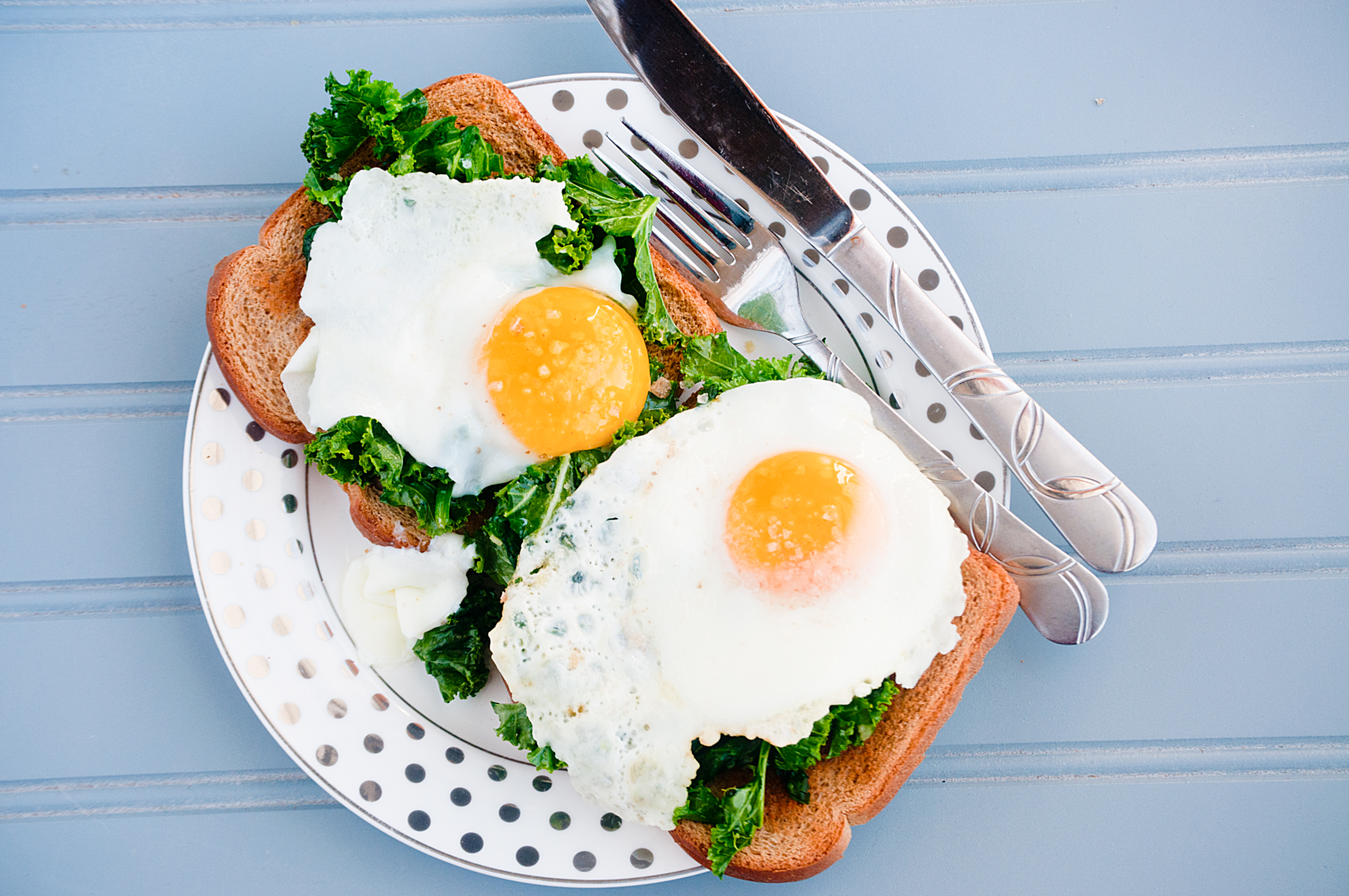 I love how the spinach takes on a garlicky, almost buttery flavor while the kale retains some crunch, some bite. Anything is delicious when you throw an egg on top, all drippy and soft. This one here, it’s a winner.

Omelets are the most versatile and delicious breakfast food out there, if you ask me. This spinach and caramelized leek omelet is definitely a family favorite!

Lately, I’ve become somewhat an omelet maniac. The key was figuring out a fool-proof method. Once you have the method down, omelet making is a snap. And fun. Really, eggs are so versatile, you can mix almost anything into them with amazing, flavorful results.

There are a few tricks to getting a perfect omelet every time. First, medium heat. If you cook your omelet on high, you’ll have rubbery, brown, diner-style eggs. What you want is a soft, pillowy egg.  Low is too low, so a nice balance of medium fits the bill. Second, lubrication. Whether you choose oil or butter (come on now. Butter it up), you need to have something to keep the omelet from sticking to the pan. After all, the most important thing when making an omelet is the ability to flip the lid. And finally, a really good spatula. I bought myself a fish spatula a few months ago and use it for everything. The end is thin enough to slide right under the eggs without breaking them. Perfect omelet rules, I tell ya.

Now, as for the mixins, think of your omelet as a blank canvas. A giant helping of vanilla ice cream just waiting to be played with, to be topped in ways unimaginable. Tomatoes, peppers, onions, beans, bacon, cheese. You really can play up an omelet and toss whatever you want inside. It’s the main reason omelet bars are so popular and beloved. Their versatility is endless.

I wanted something bright and fresh, flavorful with a little bit of a kick. Gooey, decadent, slightly salty. Caramelized leeks and spinach, plus gobs of cheese fit the bill for me. You can use less cheese and more veggies if you’re trying to stay healthy. And of course, if the snob in you scoffs at the use of American cheese, by all means try something different and more flashy. A white cheddar would be excellent here. I just love my good ol’ white American cheese. Caramelizing the leeks is a piece of cake, just follow the same method as an onion. A little bit of butter, a dash of oil, some salt and garlic. Caramelizing is a beautiful thing, my friends.