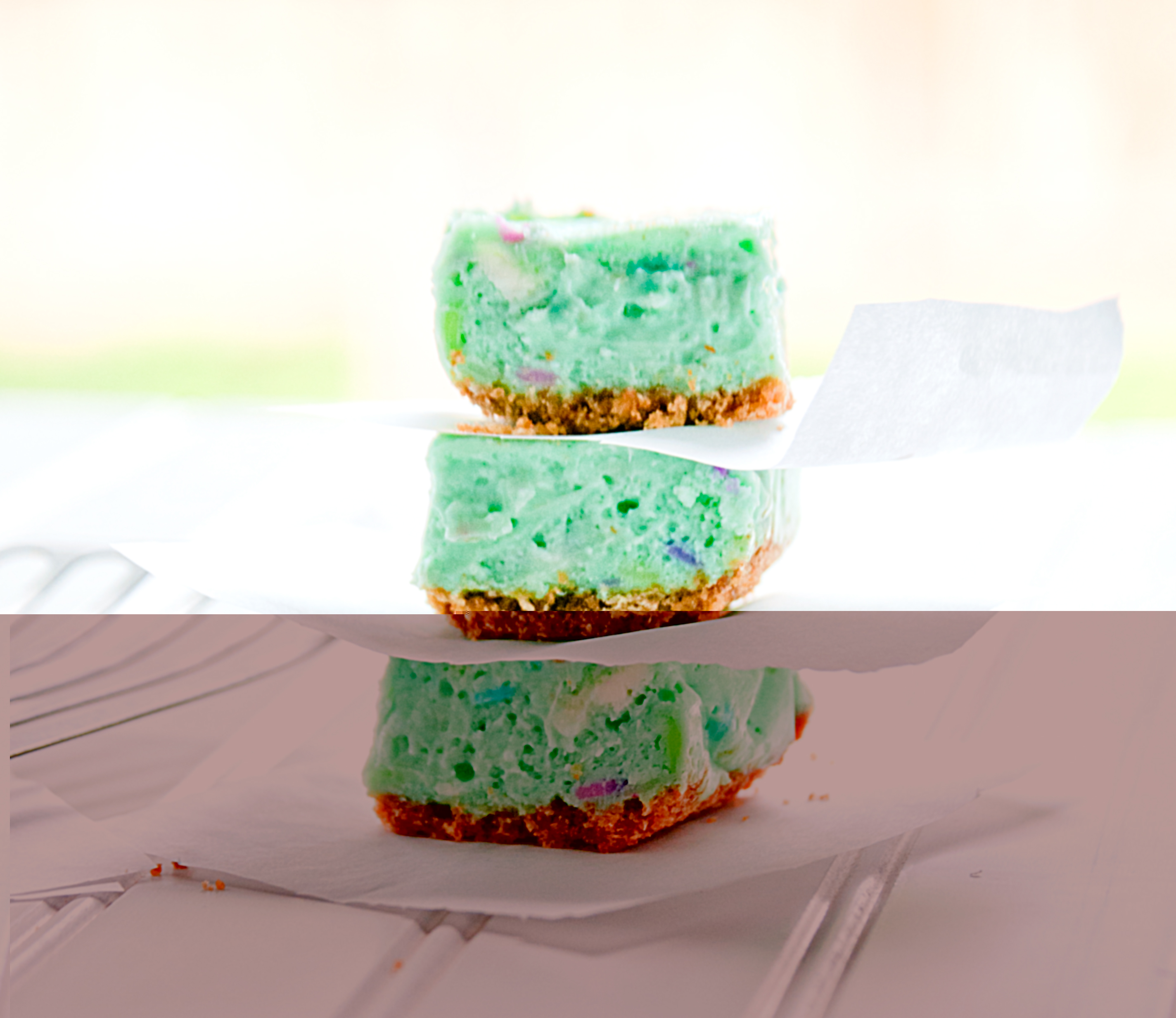 Oh, cheesecake. My one true love. It is most certainly in my top three favorite desserts, followed only be lemon tarts and French macarons. There’s something about the richness, the smoothness, the creamy texture of a cheesecake that makes me see choirs of singing angels. And with how easy cheesecake squares are, there is really no excuse to whip these up all the time. I mean, sure my thighs probably wouldn’t approve but when have I really listened to them? 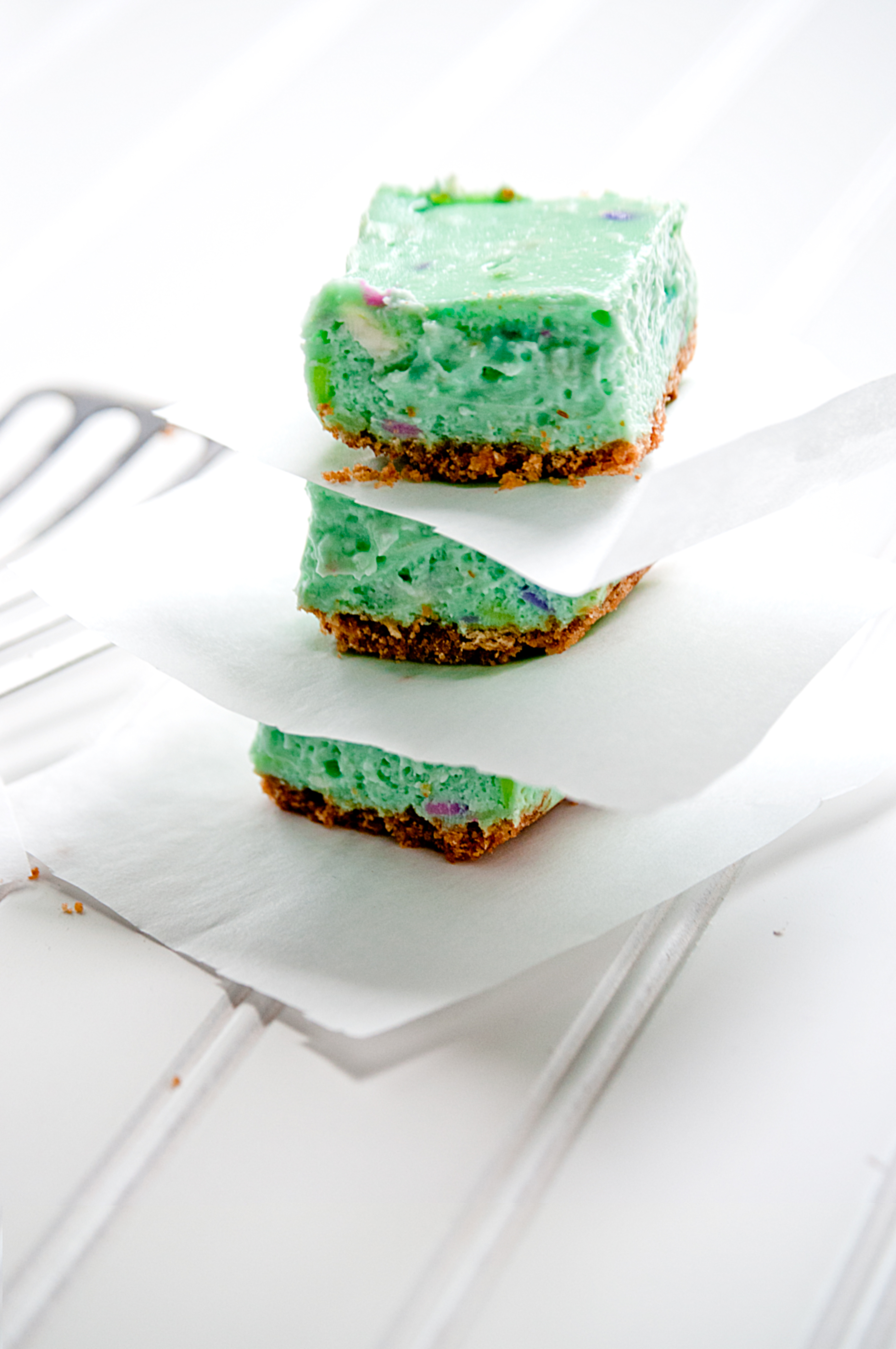 I took cheesecake a step further here by turning it into cotton candy. It gives it a sweetness, a playful nature and a party-worthy feel! 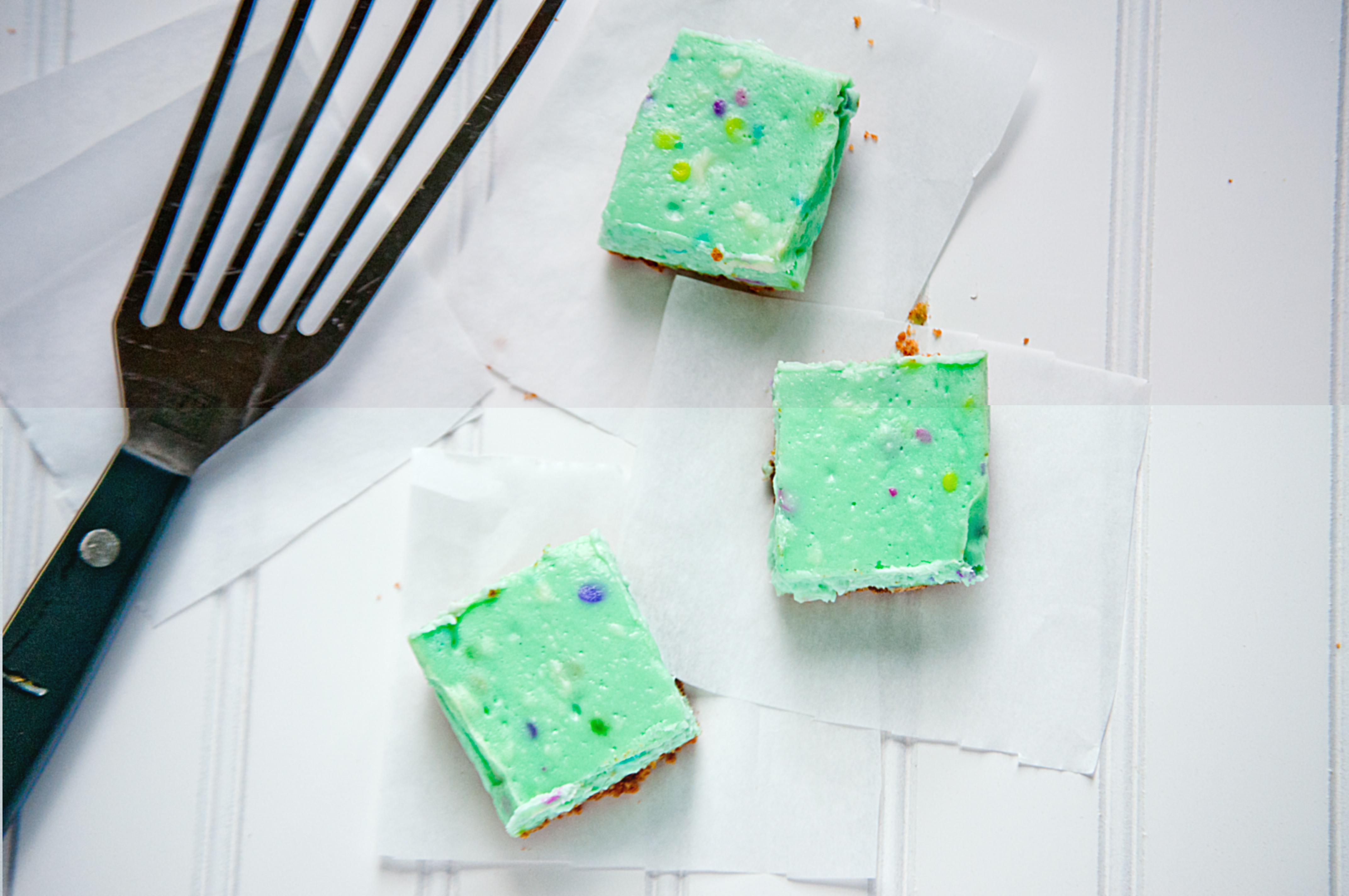 Pulled tandoori chicken nachos have just the right amount of spice and coolness to keep any nacho lover happy for hours on end. 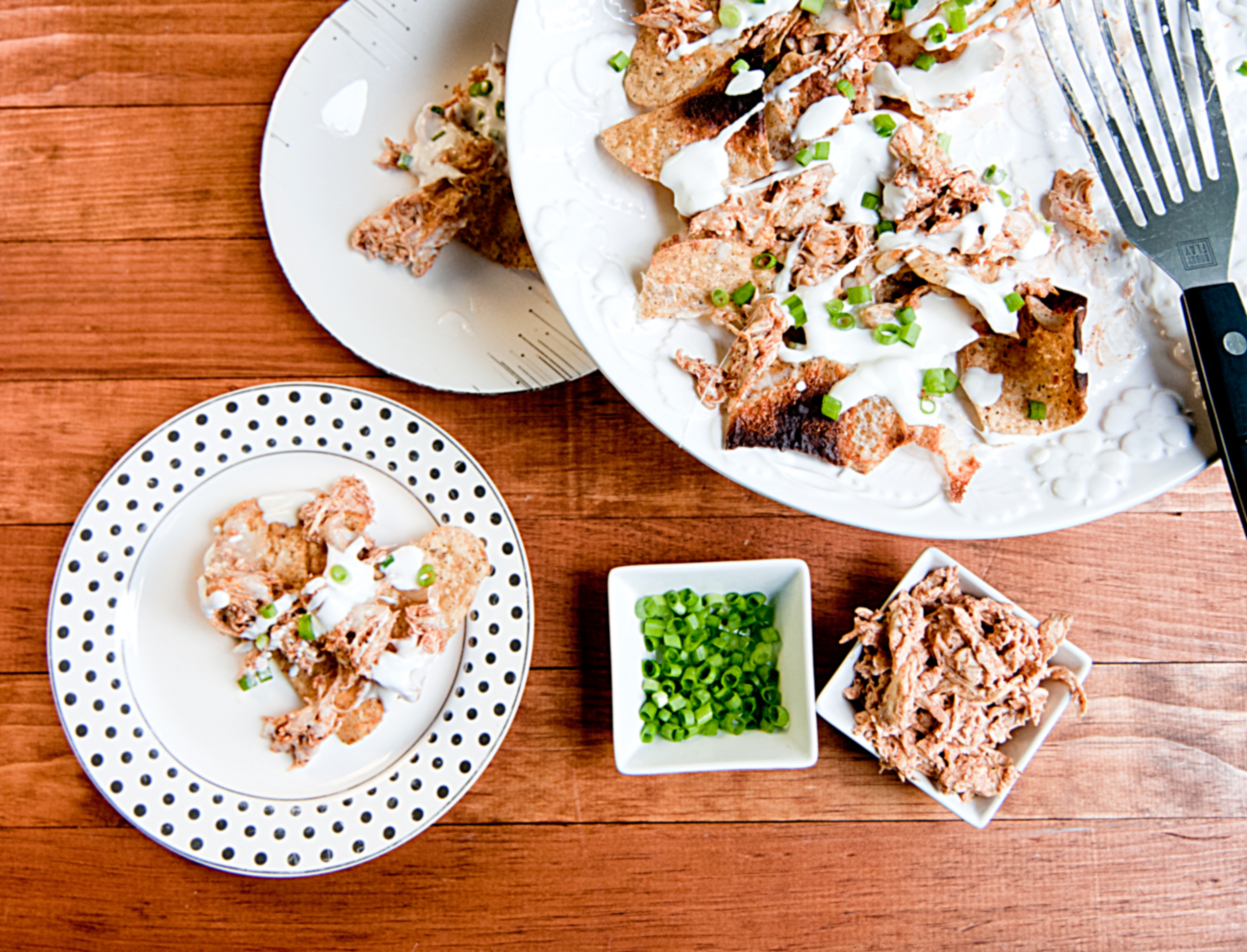 Nachos are one of those universally liked by all foods, if only for their versatility. If you don’t like beef, simply omit and add extra beans. Fans of buffalo chicken can rejoice over having their very own plate of spicy goodness to dive into, extra blue cheese please. Really, you can make anything into nachos so long as you are willing to put up with the ridiculously sloppy mess that inevitably follows with every single bite. Wear a lobster bib and you’re good, right?

I discussed these nachos with my friend Kiera for a good week before making them. We talked about different toppings and sauces, cheeses and veggies to go along with it. We laid out a plan and then the time came to cook them. I took some serious liberties with our “recipe” in that I really changed every single thing. While I still have to make the actual nachos we talked about one day, this version – these pulled tandoori chicken nachos – were spectacular! One of those eat until you literally can’t fit one more bite into your mouth nachos. Unbotton the top button of your jeans, make room on the couch for a food coma nap, run an extra three miles that night nachos.

It’s the combination of perfectly spiced pulled chicken with cool Greek yogurt (standing in for sour cream) and light Monterey Jack cheese that does it. The chicken is spicy, but not overly so. The cheese is just enough that it doesn’t overpower that chicken flavor. Each chip gets a perfect chicken to cheese to sour cream ratio, leaving not one chip naked and none soggy from too much ingredient. That’s important with nachos. So set out to make these today. You likely have all the ingredients on hand and it takes less than 30 minutes. Enjoy! 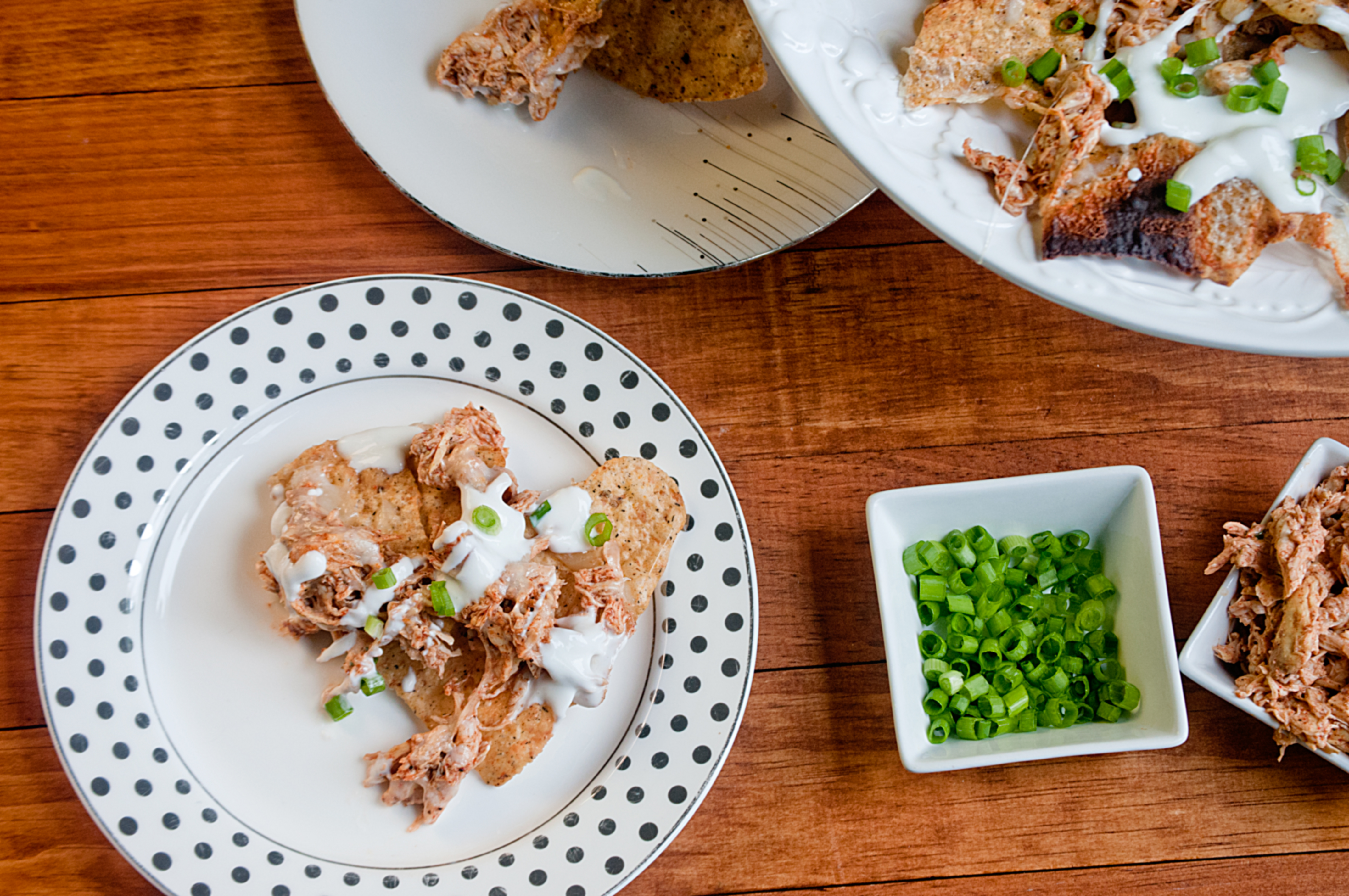 Buffalo chicken poutine is a perfect way to trash up your smothered french fries. Spicy, cheesy and crisp! 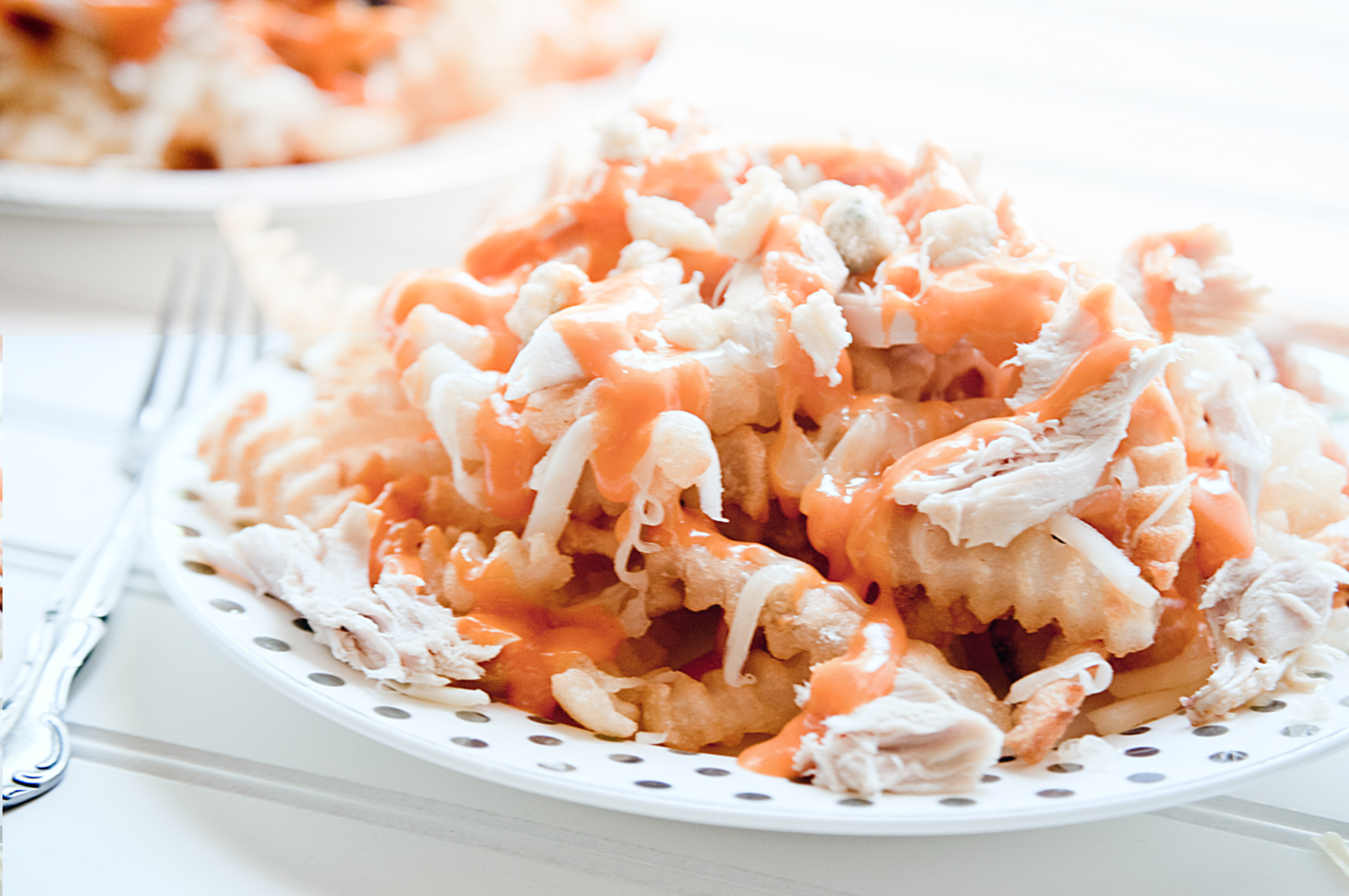 If there’s one thing us Americans are really particular about, it’s our french fries. Some like them curly, others steak. I’m a fan of crinkle cut but only if they are extra crisp. And even in fast food terms, people break it down further by choosing to side with McDonald’s over Burger King or Wendy’s over Arby’s. Then there is the topic of loaded fries: chili, bacon, cheese, gravy, mayo, ketchup. Toss any number of ingredients onto a fry and you have something entirely different going on.

In Canada, there’s a popular dish known as poutine which I equate to a really done up version of loaded fries. Gravy and cheese curds are poured over top of french fries leading to what I think is probably the most epic French fries ever.  It’s my goal to try an authentic, straight-from-Canada version one day. Until then, here’s my take on it! 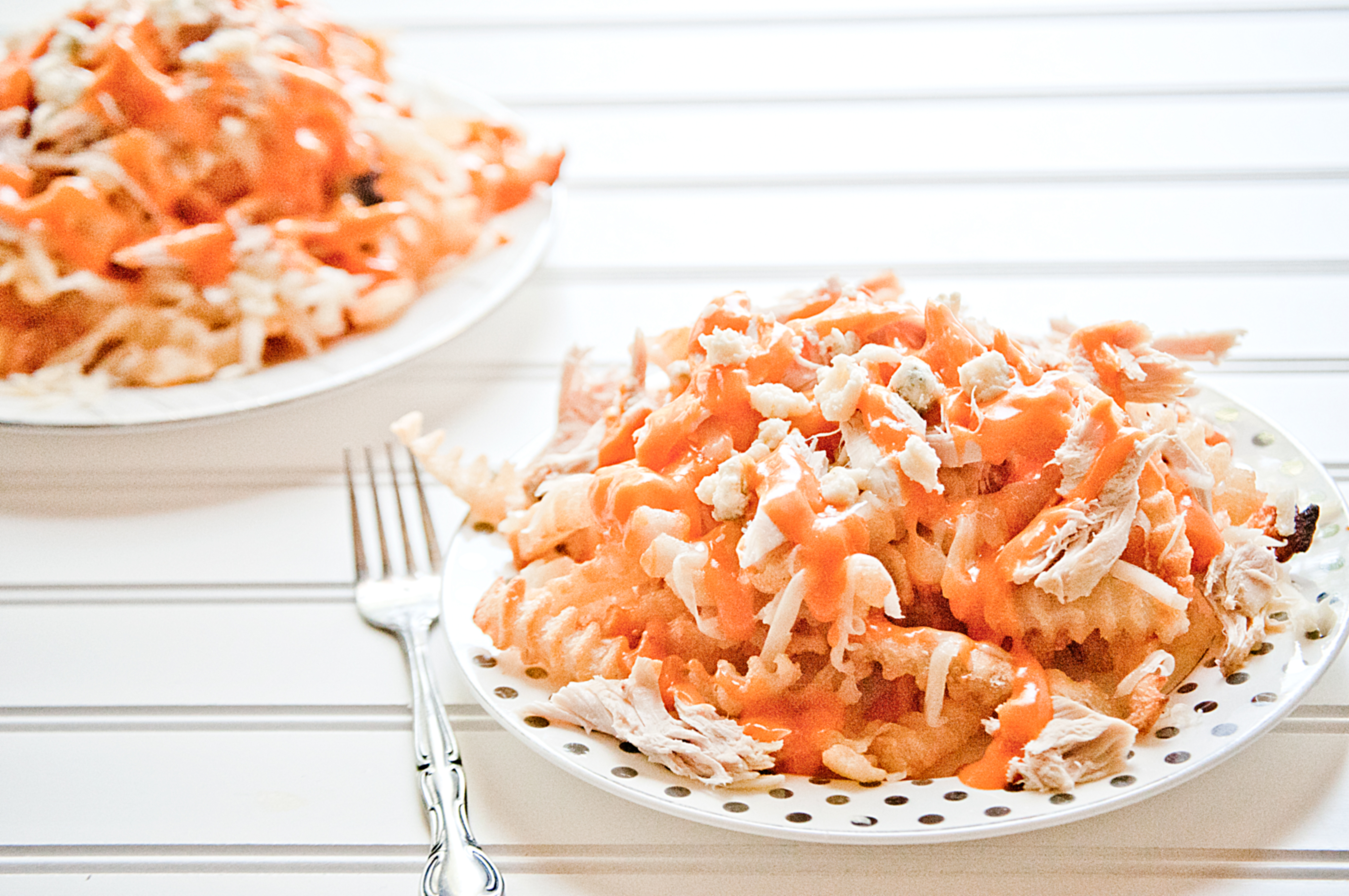 Buffalo chicken poutine seemed almost like a natural progression because you have all the good things in there. A little bit of rotisserie chicken, a gravy made with spicy hot buffalo sauce, some cheese – of course – all thrown over some crispy crinkle fries. You can call this the trashy meal of champions, if you want. I’d be ok with it. I made it for lunch over the weekend and the plates were licked clean – a true testament to its deliciousness!

Cuba Libres are essentially rum and cokes but with a healthy, sassy lime twist that takes them way up to the next level. 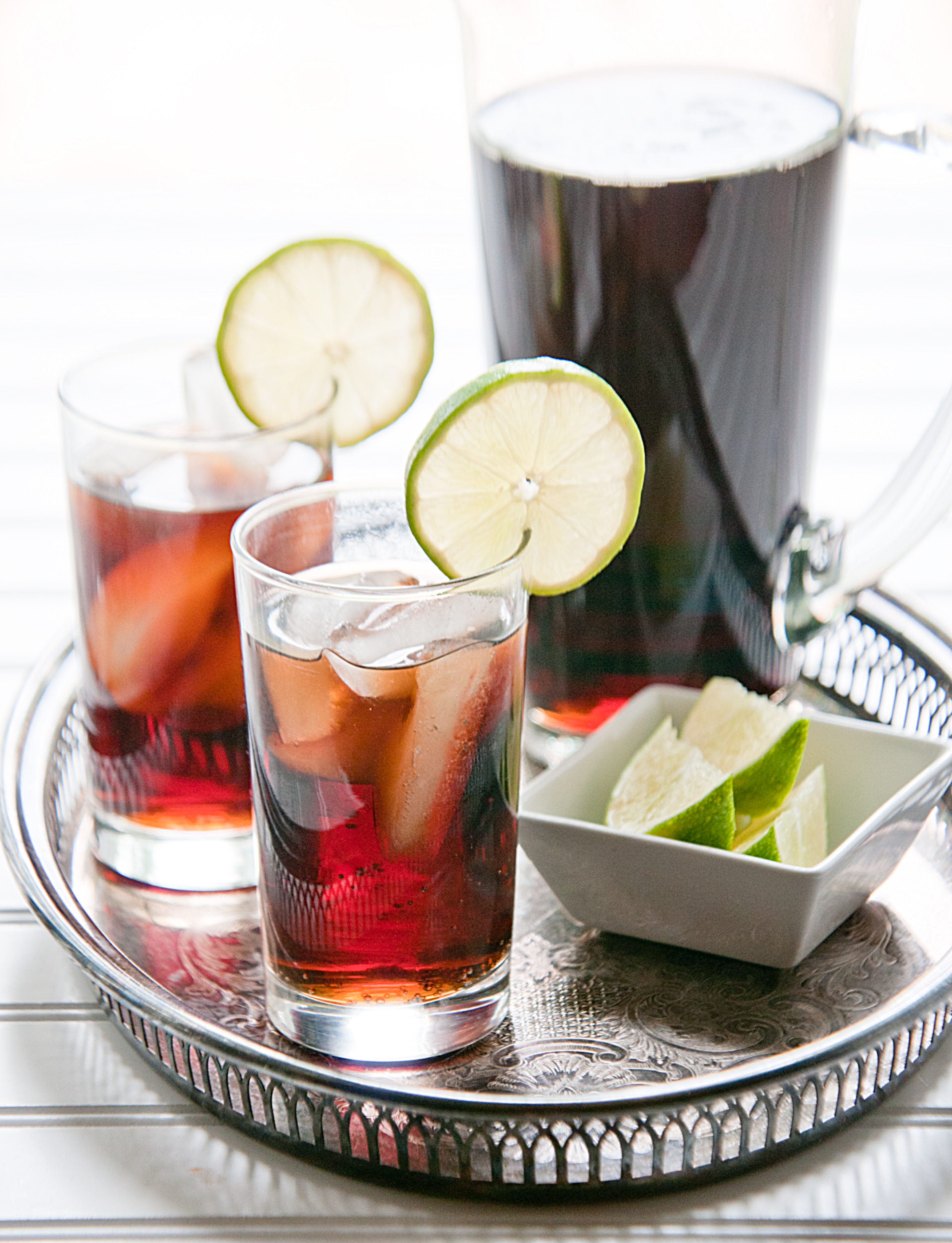 It’s amazing how one ingredient can change a dish or cocktail completely. A rum and coke is just a rum and coke, standard, simple and plain. But with a healthy squeeze of lime, it transforms into something entirely different, even taking on a new and exotic sounding name. The Cuba Libre is an incredibly fancy, sophisticated way to say rum and coke with a splash of lime. Nothing new and revolutionary but oh so much better than just a standard rum and coke. The lime cuts through the sticky sweetness of the cola, giving it a nice, acidic edge that is so very much needs. 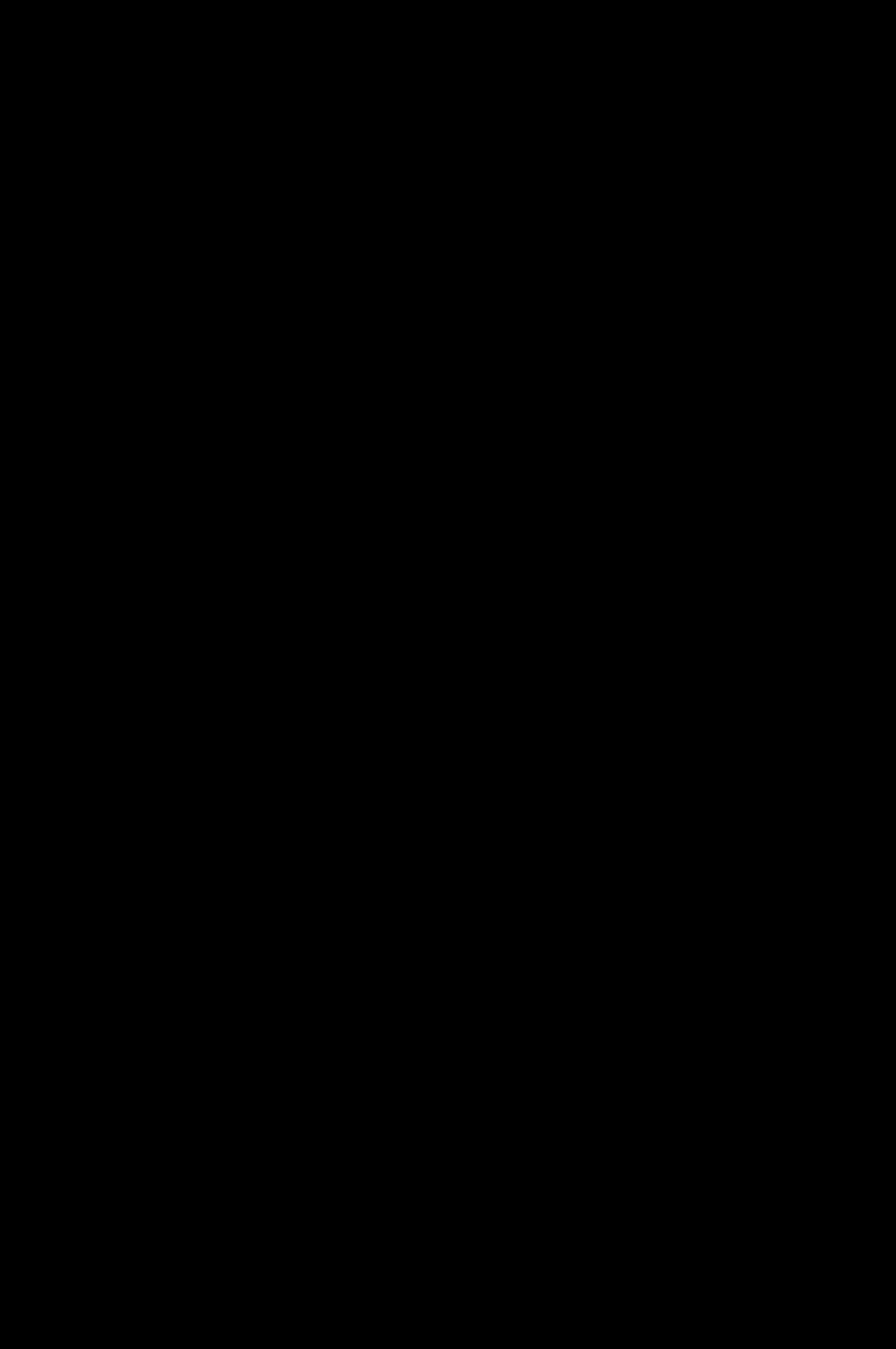 Besides, doesn’t it sound so much more fancy to say Cuba Libre? “Yes, I’ll have a Cuba Libre, please.” People will think you are worldly, traveled, experienced, sophisticated. Your friends will be impressed by your cocktail knowledge and will bow down to you as the supreme. And if you serve these at home for a party or get-together, you can wax poetic about how exotic a cocktail it is, so much better than the plain old rum and coke. Who wants to drink one of those boring things, right? The simplicity of it will just be our little secret.

When your regular margarita just won’t cut it, try these sassy and spicy habanero mango faux-garitas on for size. 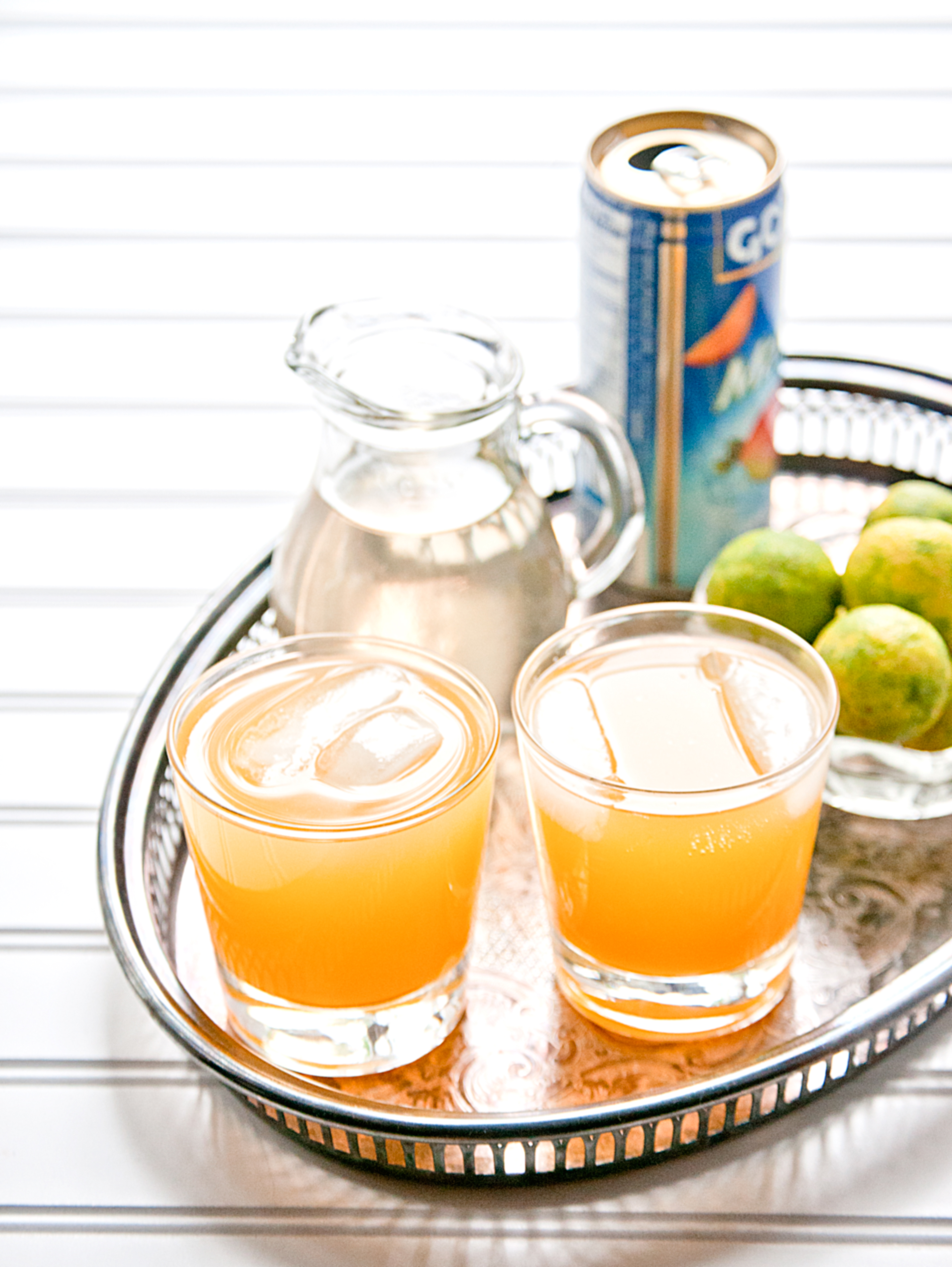 When we used to live in Bowie, I’d go to the Farmer’s Market every Sunday from opening day until well into November when it was too cold to feel your own toes. It was my favorite weekly activity. Start with a scone or magic bar and eat that while you surf your way down each stand, squeezing different fruits and eyeing up different vegetables. There was one stand that had at least a zillion different kinds of peppers, from sweet to hot. I needed all of them. The purple, the yellow, the striped ones, the ones hot enough to singe your eyebrows off.

Thinking of those peppers gave me the inspiration for today’s Recipe Redux post. Our theme this month was “From the Garden”, which I take as a fast and loose way of saying vegetables that are seasonal. I have a black thumb, nothing is coming from my garden except mint and maybe the occasional sprig of basil. But habanero peppers are coming from someone’s garden and I feel I’ve done by duty by buying them locally, from farmer’s I know and love (they are adorable, each and every one of them).

I love mixing something spicy with something sweet, so these habanero mango faux-garitas were born from that desire to kick things up a notch. The method is simple. Toss a sliced habanero in with your simple syrup and let it sit, but only briefly. These babies are potent and anything longer than 5 minutes will get you to eye brown-singeing stage. Mix the simple syrup with some mango nectar, a squeeze of fresh lime and a little soda water and bingo. A kicky, sassy faux-garita that truly takes things to the next level.